1
All Scripts Copyright Protected
Nicholas DiFabbio
nicholasdifabbio.com
Home
The End
The End is the fitting title of the last track that The Beatles recorded as a group. It is the climax of a long medley of songs on side 2 of the 1969 Abbey Road album.
On July 23, 1969 the group convened to record the 1 minute 20 second fragment of a song which was then titled Ending. This session produced the only drum solo heard on a Beatles record. It took several takes, each time the 16 second solo changing in style. Take seven was agreed to by everyone to be the best.
On August 5, vocals were added.
Then on August 8, further drums and bass were overdubbed, but before the session on that day all four Beatles ventured out to the street for a photo session. The result of which would be Ian Macmillan's iconic shot of the group walking in line through the zebra pedestrian crossing on the street called Abbey Road.
The song was later extended to 2 minutes and forty one seconds with the addition of guitar solos played in turn by Paul, George, then John. Each played a 2 two measure segment, followed by another round, then another for a total of three solos by each. John later described; [Interview]
Engineer Geoff Emerick described the scene as the three Beatles stood together on the studio floor, each with a different type of guitar. Paul with his Fender Esquire, George on his 1957 cherry red Les Paul Standard, and John on his Epiphone Casino. Each also played in his own signature style. The complete collection of solos was flawlessly excecuted in 1 take. We would like to offer a mix of each Beatle's contribution to the solo, edited together in succession. First Paul, George, and lastly John.
Then on August 18, Paul added the brief piano ending and wrote a couplet inspired by the way Shakespear would end his plays.
With this poetic line, the musical group that changed pop music and shaped a generation, ended their brilliant career and left us with a body of music that endures mightily through today and surely to beyond.
This Is Susan Kreutzer for the Beatles, Song By Song. 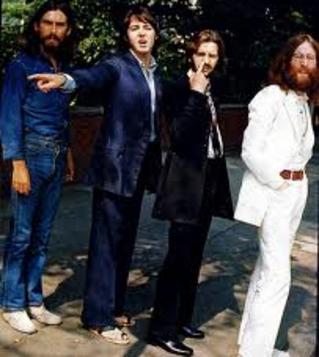 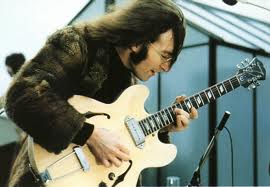