1
All Scripts Copyright Protected
Nicholas DiFabbio
nicholasdifabbio.com
Home
Ticket To Ride
In February 1965, Beatles manager Brian Epstein gave director Richard Lester a nine song demo of new Beatles songs for consideration for the upcoming film Help!. Lester chose the six he thought would be cinematically the best.
One of the chosen songs was Ticket To Ride which Lester used in the scene where The Beatles are skiing in the Austrian Alps. Ticket To Ride appeared on the Help! soundtrack album, but was also released as a single on April 9 with Yes It Is on the B side.
The origin of the title is different depending on who is telling the story. Paul remembered that in 1960 while on college holiday he and John hitchhiked to a pub in Caversham called the Fox and Hound. They performed there on acoustic guitars as the Nerk twins. The pub was owned by Paul’s cousin Elizabeth better known as Bett and her husband, Mike Robbins. The next year Bett and Mike moved to the town of Ryde on the Isle of Wight. John and Paul visited them there, therefore buying a Ticket To Ryde.  Paul brought this up during their 3 hour writing session for the song in early 1965.
Johns telling however is a bit darker. During a visit to Hamburg in 1966, he confided to show business journalist Don Short, that the so called Ticket to Ride was a document given to prostitutes in that German city that verified their fitness and hygiene to ply their trade. In those days 'ride' was slang for sex. Therefore the prostitutes had their Ticket To Ride, and John, applying his great ability for word play, coined the phrase.
The writing of it is also in dispute. John said that Paul’s contribution was quote, “The way Ringo played the drums”, Paul, being ever the gentle diplomat said; ‘John didn’t mention the full three hour session we had writing it’. He continues, ‘it was pretty much a work job, give John sixty percent of it, it turned out quite well'. Quite well indeed.
It marked a definite beginning to the Beatles mid period which included the Rubber Soul, Revolver and Sgt Pepper Albums. With it’s persistent, heavy drum beat, jangling guitars and weightier lyric content, it marked a departure from the previous summer's lighter fare. It was one of John's favorite Beatles tracks as he recalled;  [Interview]
The single reached number one in Britain and in the US on May 22, 1965.
This Is Susan Kreutzer for the Beatles, Song By Song.
Click here to see an in depth written history of this song on our partner web site;
Beatles Music History. 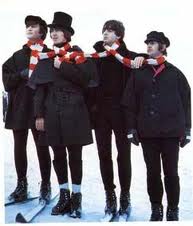 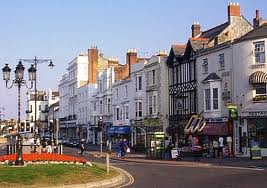 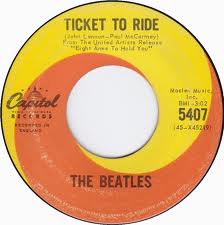 From the film Help!
A ticket to Ryde on the Isle Of Wight
The town of Ryde
Stream the original recording on Apple Music