1
All Scripts Copyright Protected
Nicholas DiFabbio
nicholasdifabbio.com
In the fall of 1963, movie producer Walter Shenson was approached by a United Artists record excecutive about making a film with the Beatles, who at the time were enjoying their third number one hit in England, with She Loves You. He was charmed by the boys, and agreed to make the picture, with the idea that the soundtrack would be a more valuable possession then the film itself. Here is Walter Shenson.
Fast forward to February 1964 as the recording sessions for the movie songs were in full swing. Sometime between 7 and 10 on the evening of Wednesday the 26th at Abbey Road studio 2, the Beatles are recording Paul McCartney’s new ballad And I Love Her. But there is a problem, a problem that rarely occurred for John Lennon and Paul McCartney, their song was too repetitive. Publisher Dick James and producer George Martin are in up in the control room wondering how to break it to the boys. They had begun the song the day before with electric guitars, bass and drums, but decided that it needed a lighter touch, so they came back on this day  with Ringo switching to Congas and Maracas and George Harrison picking up a Jose Ramirez Nylon string classical guitar while John employed his Gibson J160 acoustic. They continued to run through the song but something was still missing.
Martin finally approaches John and Paul during a tea break and says that the song needs something more, it’s too much of the same thing. Up to this point it is just a Paul song. He recounted later how he had written the song in girlfriend Jane Asher’s home on 57 Wimpole St. in London. He had just moved in there and would use the basement music room regularly to write either alone or with John. Back at Abbey Road, John and Paul take the cue from Martin. And while on their break, go over to the piano and proceed to write a bridge for the song.
Now the song was complete, but George Harrison thought it needed a riff, something to set up the first line of each verse. McCartney recalled.
A beautiful ballad from Paul McCartney, no doubt written for Jane Asher and lip synced on screen by the Beatles in the A Hard Days Night movie, which was released July 6, 1964
This Is Susan Kreutzer for The Beatles, Song By Song.
And I Love Her 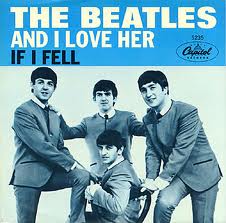 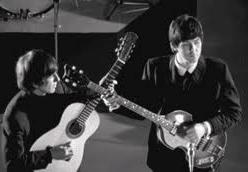 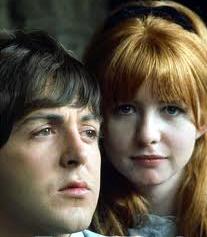 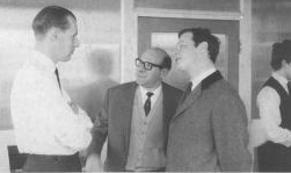 George Martin, Dick James, Brian Epstein 1964
'And I Love Her' from 'A Hard Days Night'
Home
Stream the original recording on Apple Music