1
All Scripts Copyright Protected
Nicholas DiFabbio
nicholasdifabbio.com
Baby You're A Rich Man
At 9pm on Thursday May 11, 1967,  the Beatles convened at Olympic Studios in London to record their new song Baby You’re a Rich Man. It was only the second time they recorded outside of EMI Abbey Road studios. A few months later they would be recording the basic rhythm track for All You Need Is Love at Olympic. It was a top London recording studio from which many hit records came and where the Rolling Stones usually recorded.
The engineer was Keith Grant, and he discussed the May 11 session later with tape operator George Chkiantz. They both previously wondered what it would be like to record John Lennon's voice, and were both amazed at how good it was. They couldn’t believe anyone could sing that well. Here is part of what Grant heard that day;
The finished recording contains elements of two songs. One by Lennon called One Of The Beautiful People, the other a mostly single note McCartney chorus idea called Baby You’re A Rich Man. As in Sgt Pepper's A Day In The Life and Let It Be’s, I’ve Got A Feeling the two disparate musical ideas were joined as one.
In 1980 Lennon, said;
“That's a combination of two separate pieces, Paul's and mine, put together and forced into one song. One-half was all mine. Then Paul comes in with, Baby You're A Rich Man, which was a lick he had around."
Beautiful people in the 1960’s referred to the hippie generation who viewed life in general and nearly everything else as beautiful. In 1968 Paul talked about writing the song. He said; “Baby, You're A Rich Man was co-written by John and me at Cavendish Avenue. There was lots of talk in the newspapers about the beautiful people. That was what they called them, so, we figured, Well, how does it feel to be one of the beautiful people?"
A few interesting elements of the song and recording; The line about keeping money in a paper bag referred to manager Brian Epstein who allegedly did that with Beatles concert fees.
Also, on one of the tape boxes is written a plus sign and the name Jagger, which reveals the possibility of Mick Jagger singing on the out choruses. It is possible that the slightly out of tune lower vocal heard right here amongst the others,  is Jagger.
The oboe sounding introduction was John playing a Clavioline keyboard which was a precursor to the synthesizer. It could imitate the tonal qualities of a variety of instruments, but play only one note at a time.
Baby You’re A Rich Man was intended for inclusion in the upcoming Yellow Submarine animated film. It was used in the film but not the soundtrack album, instead being chosen for the B-side of their momentous July 1967 single, All You Need Is Love. 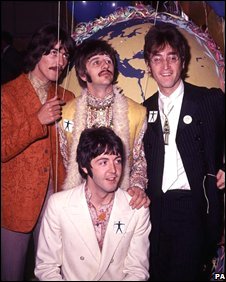 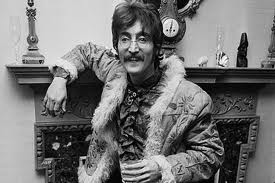 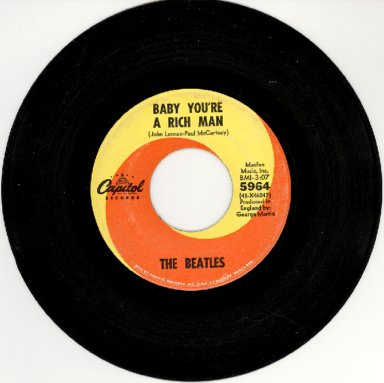 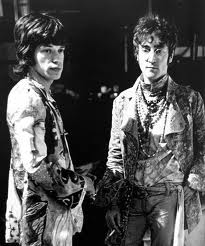 Mick Jagger 1967, at Our World Broadcast
Home
Click here to see an in depth written history of this song on our partner web site;
Beatles Music History.
Stream the original recording on Apple Music