1
All Scripts Copyright Protected
Nicholas DiFabbio
nicholasdifabbio.com
It has been said before that one who considers John Lennon to be only the leather clad rock and roller capable of writing only simple rock is woefully mis informed.
John was nostalgic and possessed a master’s ability to produce beautiful and heartfelt melodies with equally sentimental lyrics. The beautiful Abby Road ballad Because speaks to this fact in brilliant fashion.
One day in early 1969, while relaxing at his home, he heard Yoko Ono playing Beethoven’s Piano Sonata #14 in C sharp minor, better known as The Moonlight Sonata. He was inspired immediately and asked Yoko to the play it again, but reverse the order of the chord changes. She did, and John proceeded to learn it and write a simple straightforward lyric. Here is a clip from his home made demo.
The basic track was recorded on August 1, 1969 with producer George Martin playing a Baldwin spinet electric harpsichord, while John doubled the arpeggiated chords on electric guitar. Paul added bass and Ringo tapped out time on a hi hat that was not used in the final recording.
Then came the vocals, like the old days of This Boy and Yes It Is. The studio lights were dimmed, and it was, John, Paul and George, in a semi circle each positioned in front of a Neumann microphone flawlessly delivering an intricate three part harmony performance which was being recorded onto a single track, while Engineer Geoff Emerick manually balanced the gorgeous  sound emanating from the studio floor.
George Martin had scored nine harmony parts as the three Beatles repeated their performance again and again, perfecting the phrasing, spending hour after hour, ending up with nine vocal parts spread over three tracks of the 8 track recorder. Emerick states in his book Here There And Everywhere that on that day, he saw the four Beatles at their finest. There was one hundred percent concentration from all of them, all working in tandem to get the vocal nailed, spot on. It was George Harrison’s favorite track on the Abbey Road album.
Because also features one of the first uses of the Moog synthesizer, which George had purchased and is also used tastefully on other songs from this period.
Because was a fine addition to the wonderfully constructed medley on side 2 of the 1969 Abbey Road LP. 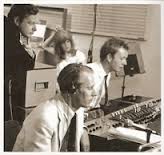 Neumann U48 Microphone, I happen to proudly own one of these!
Stream the original recording on Apple Music