1
All Scripts Copyright Protected
Nicholas DiFabbio
nicholasdifabbio.com
There were three concentrated songwriting periods for John Lennon and Paul McCartney for the Hard Days Night film and album.
The first was Paris in January 1964 while performing a three week series of concerts at the Olympia Theater. A piano was brought to their hotel suite at The George V Hotel. That is where Can’t Buy Me Love as well as John’s If I Fell, and I Should Have Known Better were written.
The second period was the next month, while the Beatles were in the states to perform on the Ed Sullivan Show on consecutive February Sundays. In between those shows, while in Florida, they were told they needed more up tempo songs for the movie, so another batch were written in the sunshine state, including Lennon’s Tell Me Why, and You Can’t Do That.
The third period was while the Beatles were on holiday after filming had completed. John and Cynthia, and George and Patti Boyd vacationed in Tahiti. This is where John’s Anytime At All and When I Get Home were written.
Can’t Buy Me Love is an uptempo twelve bar blues and was used by director Richard Lester in the romp scene in the film as the boys ‘break out’ down the stairs out of the theater into the freedom of wide open space. Up to this point in the film, the Alan Owen script as directed by Lester purposely had the boys in confined spaces and circumstances with each succeeding scene slowly building to the moment when they could let loose. Lester explained; [Interview]
The recording for the song took place at EMI’s Pathe Marconi Studios in Paris during the Beatles concert stay there in January. It was the only recording session of their career held outside of London.
The original arrangement did not include the chorus introduction which was producer George Martin’s idea. He later said;
"I thought that we really needed a tag for the song’s ending, and a tag for the beginning; a kind of intro. So I took the first two lines of the chorus and changed the ending, and said 'Let's just have these lines, and by altering the second phrase we can get back into the verse pretty quickly." The boys then said, "That's not a bad idea, we’ll do it that way".
In 1966, when asked about the song’s real meaning McCartney said;
"Personally, I think you can put any interpretation you want on anything, but when someone suggests that Can't Buy Me Love is about a prostitute, I draw the line. That's going too far".
Can’t Buy Me Love was released on March 16, 1964 in the US and on the 20th in Britain. It went to #1 in both countries.
Can't Buy Me Love
Click here to see an in depth written history of this song on our partner web site;
Beatles Music History. 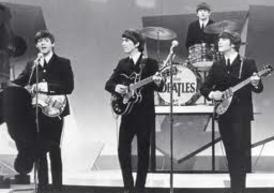 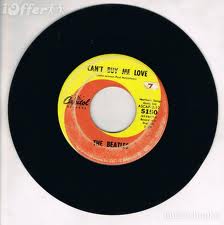 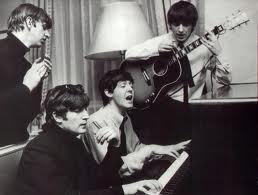 Songwriting at the George V Hotel 1964 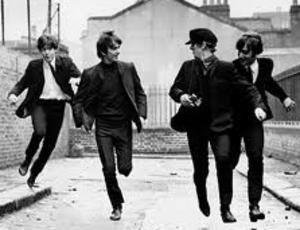 On The Ed Sullivan Show 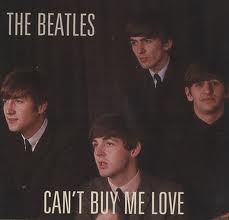