1
All Scripts Copyright Protected
Nicholas DiFabbio
nicholasdifabbio.com
Drive My Car
A casual listener to Drive My Car, Paul McCartney’s opening song from The Beatles 1965 LP, Rubber Soul, would think that the singer/narrator is asking the girl to be his driver. In fact that is what this writer thought for some 45 years. But research into the song’s origin in fact reveals that the reverse is true. The key words in the first verse are ‘she said’. So it goes ‘Asked the girl what she wanted to be ‘she said’ baby can’t you see. From there, it is apparent that the girl, who Paul McCartney described as a young Hollywood starlet, is asking the man, if she get’s famous, to be her chauffeur and drive her car. In this context the rest of the song follows and makes sense, culminating in the final verse where he gives in, and she confesses that she does not have a car yet.
We’ve discussed in past episodes what we feel was the invaluable input of John Lennon on the lyrics of Lennon and McCartney songs. Even if a song was and is thought of even now as a Paul McCartney composition, the turn of phrase or the addition of an off kilter line, would turn a good song idea into, well, a Beatles song, which of course would set it so obviously apart from either of their subsequent solo efforts.
And so goes the writing back story of Drive My Car.
Described by McCartney as the closest they ever came to a dry session, he recounted coming to Lennon’s Weybridge home in the fall of 1965 with the melody in his head, but as he described, a disastrous lyric, the chorus line of which was, ‘you can buy me golden rings’. John immediately deemed it garbage and the two set to work on fixing it. But nothing came. Just as they were to give up, Paul suggested taking a tea break, and then quickly, the idea Drive My Car came. [Interview]
Another twist in the lyric  reveals that he could not only be her driver, but her lover also.
McCartney later said the phrase Drive My Car was an old blues euphemism for sex.
The song was recorded on October 13, 1965 with Paul on bass and George Harrison on a Fender Stratocaster electric guitar. Harrison suggested a riff that he and Paul double on bass and guitar.  His inspiration was American R&B singer Otis Redding's version of the song Respect which George had been listening to, and that uses the same low bass riff. In fact, the riff in both songs is identical.
Drive My Car is featured as the first song on the British Rubber Soul LP released on December 3, 1965 and later in America on the album Yesterday And Today released June 20, 1966. 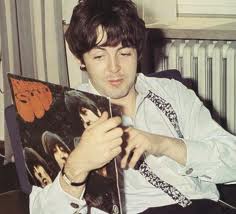 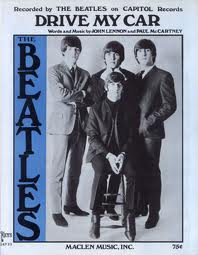 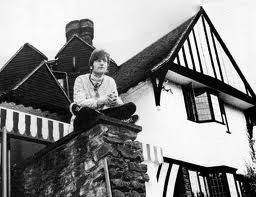 Lennon At His Weybridge Home
Click here to see an in depth written history of this song on our partner web site;
Beatles Music History. 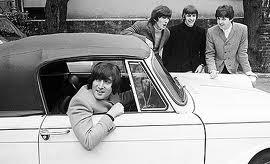 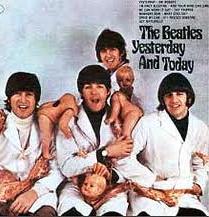