1
All Scripts Copyright Protected
Nicholas DiFabbio
nicholasdifabbio.com
We start at a press conference late 1966, The Beatles were asked if they would ever record separately;
[Interview]
Earlier that year, Paul McCartney sat down to an old upright piano wondering what kind of person would pick up rice at a church after a wedding. The result of his effort would be the start of one of his most hauntingly beautiful songs.
In April 1966, The Beatles began recording the seminal Revolver album. Paul was living with actress girlfriend Jane Asher in London. He would steal away to their basement music room where the song Eleanor Rigby was born. Paul played an E minor chord over and over on the piano while he improvised melodies on top of it. The notes and the words ‘rice in a church where a wedding has been’ came to him all at the same time. As Paul describes; this was his usual method of writing songs; [Interview]
He envisioned a lady picking up the rice and named her, Miss Daisy Hawkins. Singer songwriter Donovan remembers Paul playing the song for him using a nonsense name for her; Ola Na Tungee. The final choice, came from liking the name Eleanor after working with Actress Eleanor Bron in the film Help. The surname Rigby was discovered by Paul as he waited for Jane Asher to finish a performance at the Theatre Royal in London. Nearby he noticed a sign above a shop called Rigby and Evans Ltd, Wine and Spirit Shippers.
The backing string track was recorded on April 28th, 1966 and although Paul could not read music, Beatles producer George Martin noted in a later interview that the musical ideas for the track were mostly Paul’s.
[Interview]
Paul had introduced another character named Father McCartney, whom Ringo suggested could be darning his socks. Friend Pete Shotten suggested changing the name from Father McCartney to avoid confusion with Paul's father. They looked through a phone book and found McKenzie. George contributed the idea of ‘lonely people’.
Shotton also suggested an idea for the last verse, where Rigby and Father McKenzie would meet. John didn’t like the idea, but Paul did and fashioned the beautiful last verse with Eleanor Rigby dying and Father McKenzie attending her funeral.
An interesting coincidence surrounds the song. In the 1980’s, an old gravestone with the name Eleanor Rigby was found in the cemetery at St. Peters Parish Church in Woolton. Within sight of where John and Paul first met in 1957.
This is Susan Kreutzer for The Beatles; Song By Song
Eleanor Rigby 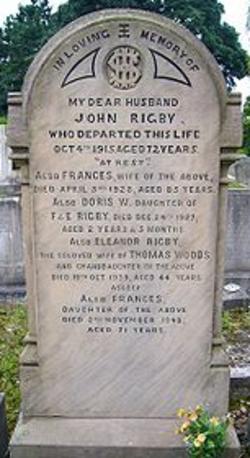 Grave of Eleanor Rigby, died October 10, 1939 at St Peters Parish, Woolton, Liverpool. Where John and Paul first met in 1957
Click here to see an in depth written history of this song on our partner web site;
Beatles Music History.

Statue of Eleanor Rigby in Stanley Street, Liverpool. A plaque to the right describes it as "Dedicated to All the Lonely People"
Home 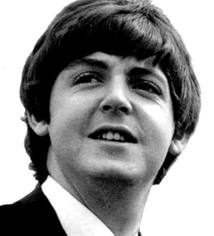