1
All Scripts Copyright Protected
Nicholas DiFabbio
nicholasdifabbio.com
Among the blitzkrieg of Beatlemania songs in 1963, after Love Me Do and Please Please Me and before She Loves You was The Beatles first true number # 1 hit in Britain, From Me To You. It spent seven weeks at #1 in England, the longest of any Beatles single.
Earlier that year, the Beatles were asked to be part of the prestigious National Tour in Britain. While on the tour bus they were reading the letters column in the pop newspaper New Music Express. The column was called From You To Us. So came the inspiration for the title of the new song they were asked to write by manager Brian Epstein for their next single.
From Me To You was an important step in the songwriting development of John Lennon and Paul McCartney. As John and Paul endeavored to stretch out into new directions in chords and harmony, no one influenced them more in this period than Roy Orbison, the American crooner who also wrote his own songs.
In May 1963, as The Beatles toured Britain again, Orbison was on the bill and they heard the power of his songs and voice close up.
Paul McCartney; [Interview]
On this tour, Orbison wrote and performed a new song titled Pretty Woman which would be a world wide hit for him in 1964. But it was the bridge chords in that song, the pivot D minor chord from the verse key of A to the bridge key of C that fascinated John and Paul and inspired the key change in the bridge in From Me To You as Paul recalled; [Interview]
This particular chord sequence would be a Lennon McCartney favorite in the years to come being used in among others, Strawberry Fields Forever, Hey Bulldog, She’s Leaving Home, and I Want To Hold Your Hand.
The single From Me To You which was backed with Thank You Girl on the B side, was released in May of 1963 and though it was a multi week #1 hit in Britain, it was buried at number 116 in the US on the small Swan label. It was not until I Want To Hold Your Hand in early 1964 that America discovered The Beatles. Capitol records, during the height of Beatlemania, when fans in the US were buying anything recorded by the Beatles, for some reason did not include it on any American album.
The song would remain almost unknown in America for ten years until it’s inclusion on the 1962 to 66 Beatles compilation referred to as the red album, released in 1973.
From Me To You
Click here to see an in depth written history of this song on our partner web site;
Beatles Music History. 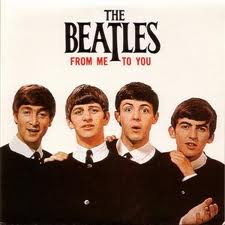 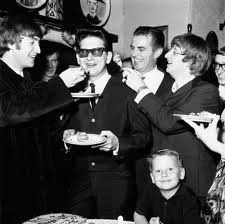 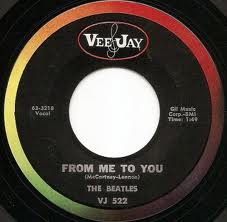