1
All Scripts Copyright Protected
Nicholas DiFabbio
nicholasdifabbio.com
Home
Which six of the eight new Beatles songs, specifically written by John Lennon and Paul McCartney for the Hard Days Night Movie would director Richard Lester use? He felt that six was all that would fit into the story so he had to cut two, as he described later; [Interview]
John wrote I’ll Cry Instead as an answer to Paul’s Can’t Buy Me Love. There was a sequence to be in the film where the boys break out to a romp in an open field and Lester needed a song for it. John, being in a competitive mood as Can’t Buy Me Love was climbing the charts, wrote the song for this scene but Lester felt that the lyric was too negative for such an exuberant moment in the movie. John later said about the song, ‘I wrote that for A Hard Day's Night but Dick Lester didn't want it.’ Instead, Lester chose Can’t Buy Me Love for the sequence.
The song’s lyrics do reflect the frustration that John felt at the time with his new found fame. It was one of a few from this period for John that indicate he was now putting more of his feelings into his lyrics. He said the line ‘A chip on my shoulder that’s bigger than my feet’ was accurate of his feelings at the time. This was the beginning of him including more introspection into his lyrics.
This happened in part because of a Bob Dylan album. During a concert series in Paris in January 1964 while at the George V Hotel, the boys were instructed to write new songs for the Hard Days Night Movie. The record that was constantly being played in their suite was Dylan's new album, Free Wheelin. It triggered a feeling in John that he needed to put more of himself into his lyrics. This being combined with the feelings of isolation that his now overwhelming fame created spawned the more introspective lyrics for I’ll Cry Instead.
On June 1, 1964 The Beatles convened to record songs for the British Hard Days Night Soundtrack album that were not being used in the film. I’ll Cry Instead was begun on this day. Interestingly, it was recorded in two sections. It is surmised now that, they must have felt the song was too short, so after an initial 6 takes 2 more takes were done of just the 2nd bridge and final verse. On June 4 takes 6 and 8 were edited together to create the full version.
In 1981 movie producer Walter Shenson re released the Hard Days Night film and added a sequence in the beginning using I’ll Cry Instead This is the version of the film that most people are familiar with today.
This is Susan Kreutzer for the Beatles Song By Song
I'll Cry Instead
Click here to see an in depth written history of this song on our partner web site;
Beatles Music History. 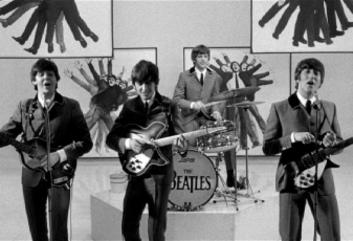