1
All Scripts Copyright Protected
Nicholas DiFabbio
nicholasdifabbio.com
Home
Only one person who was closely connected to the Beatles has not cashed in or told their story.
It is Jane Asher, girlfriend of Paul McCartney from 1963 to 1968. She has never spoken or written about their time together. And Paul, respecting her wishes has done the same. But there are some McCartney songs that shed a light on their relationship trevails during their 5 years together.  In a recent episode, we told the story of his song, All My Lovin, written in the first flushes of love with her. But there was a line in that song which was not entirely accurate, he sings ‘remember I’ll always be true’. Paul at that time rationalized to himself that he was not married, and that he would still live the bachelor life in London when Jane was away on acting assignments. Jane became aware of these dalliances and it caused friction in their relationship.
In 1965 , this friction became evident in 2 songs written by McCartney for the upcoming Rubber Soul LP. The songs are You Won’t See Me, and I’m Looking Through You.
Jane Asher was no pushover for McCartney, she had an independent nature and continued pursuing her acting career despite McCartney's wish that she should be happy enough just being his girlfriend.
At that time she took a job with the Bristol Old Vic Acting Company in Bristol England, some 120 miles from London. During a particularly contentious row in this period, Paul wrote We Can Work It Out, which was his plea for peace, but as the situation grew worse, Paul became frustrated and lashed out. I’m Looking Through You, with it’s angry lyric; ‘I’m looking through you, and you’re nowhere', and also You Won’t See Me which chronicled his un returned phone calls. But despite these problems, they later became engaged. Their engagement however was called off in 1968 after Jane returned home unexpectedly and discovered Paul with writer Francie Schwartz.
Jane Asher continued acting, and was featured working opposite Lawrence Olivier in Wish Me Luck in 1987. She is also a Distinguished Supporter of the British Humanist Association, and President of the National Autistic Society.
She has written three best selling novels and runs a company which makes party cakes and sugar crafts for special occasions.
Paul, years later with perspective and maturity on his side admitted that his behaviour was a bit chauvinistic during their time together.
This Is Susan Kreutzer for the Beatles, Song By Song.
I'm Looking Through You/You Won't See Me
Click here to see an in depth written history of this song on our partner web site;
Beatles Music History. 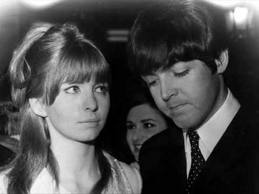