1
All Scripts Copyright Protected
Nicholas DiFabbio
nicholasdifabbio.com
Home
John Lennon was born on October 9, 1940 to Fred and Julia Lennon. At age 5, while on a trip to Blackpool, he was forced to choose between his mother or father. He chose his father, but then ran to his mother. Fred, a merchant marine sailor, then disappeared for 20 years.
His mother Julia was attractive and free spirited. Her family felt that that John would be better served by living with Julia's older sister Mimi and her husband on Menlove Ave in Liverpool.  But Julia lived only two miles away,  she would see him often. It was she who introduced him to music, as his cousin Stanley Parkes remembers.  [Interview]
Julia had started another family and had two daughters who would be John’s half sisters, one of whom, Julia Baird, remembers their mother and her feelings for John. [Interview]
An event that would scar John for life occurred on July 15, 1958. On that summer day, boyhood friend Nigel Whalley came to visit John, but he was not at home. Julia happened to be there, and as he remembers, he was the last person to see Julia alive. [Interview]
She was hit by a car driven by an off duty policeman, and died instantly. From then on as John said, he was responsible to no one. It would take ten years for him to write a song about her. Beginning with a line from a book a of proverbs published in 1927 by Lebanese mystic Kahlil Ghibran which said, 'Half of what I say is meaningless, but I say it so the other half may reach you', John poured his heart into the wrenchingly beautiful ballad, 'Julia' which appeared on The Beatles White Album in 1968.
The conventional wisdom was that John was the word person and Paul the music. As this melody so achingly demonstrates, John took a melodic back seat to no one.
This Is Susan Kreutzer for The Beatles, Song By Song.
Julia 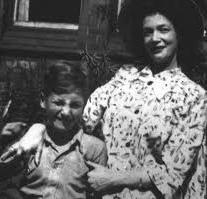 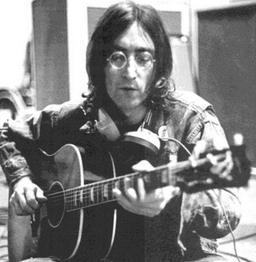 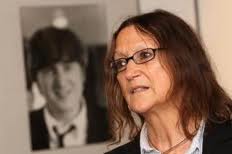 Julia Baird, John's half sister
John with his Mum, Julia 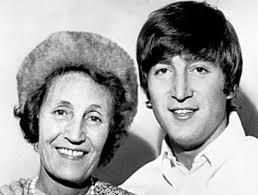 With his Aunt Mimi
Click here to see an in depth written history of this song on our partner web site;
Beatles Music History.
Stream the original recording
on Apple Music